Everyone ends up with dirty clothes at the end of the day.  Of course when we are young, our parents take care of that not so small chore for us.  While I was in college and for a few years in my young adult life, I had to think about an hour or two at the laundromat, one often adjacent to an establishment that served adult beverages, to be sure I had enough clean clothes for the week.  Luckily as I earned a little more money and had larger apartments, I was able to install a washer and dryer in said apartments and it wasn’t more than 90 minutes between dirty and clean and ready to go out for the evening. 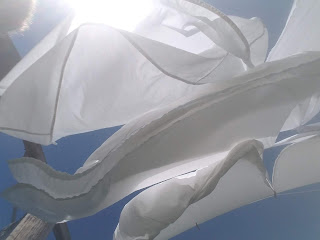 When a child joins your family, a dryer and or several drying racks and a washing machine are almost a necessity to ensure you aren’t spending an hour or two every other day at the laundromat.  This summer when my dryer decided that its 27 years were enough, we went without. Lucky enough to still have a washer, we strategically watched the weather, and on the best of days three or four loads were washed and hung on the line to dry.

Thankfully where we live, free on the side of the road, is a very real thing.  Just as fall started to close in, we found a dryer on the side of the road. The sign said, barely used, just doesn’t run.  According to the serial number, the unit was barely two years old. A little farmer’s ingenuity and an $7.00 part and we have an almost brand new dryer.

As a farmer, I can’t tell you how many extra loads of laundry I have done.  For instance, I came home from my off farm job - I work in a school lunch room, so there are various and sundry food bits, specs of grease, cleaning supplies, etc. that get on your ‘work’ clothes.  I changed out of those work clothes and into freshly laundered clothes that are oil, blood, dirt, etc. stained and far less presentable to go outside and work around the farm. My clean farm pants were quickly soiled with blood, water and fat dripping from the birds we harvested to clean out our chicken coop.  Birds that are no longer laying and too old to remain productive on the farm are loved and thanked for their service then added to our freezer to soon become chicken soup or chicken and biscuits.

While certainly not the cleanest job in the world, it was the least messy of those on the list today to start the afternoon.  Then it was out to the pigs pen to fix the hut which has lost two of its three walls over the past season to rubbing, scratching and otherwise playful pigs.  Shoveling mud, kneeling in old hay soaked with mud, and hunching under a collapsing roof to use your back and shoulders to lift a dusty roof rafter and support a leaning, dusty, and slightly muddy wall so that Little man’s father can re-bolt it together are not conducive to keeping your only slightly soiled farm clothing clean.

Then since the temperature is a lovely 57 degrees this evening, you have already made room in the newly constructed main chicken coop and there is still daylight left, why not go out and get the 40 birds from the pullet palace, band them and integrate those young ladies into the main coop.  Here in Northwestern Vermont, it has rained for four or better out of the seven days of the past couple of weeks. Anything that isn’t completely undercover - including the yard of the pullet palace and the pigs pasture - is completely saturated. This time of year should and could be called Vermont’s second mud season.  While not nearly as bad as the days that follow our first couple of thaws and spring rains, it comes a very close second. Catching chickens that are running around in a muddy chicken yard, holding them close to your body while you extend a leg and install a plastic band around its foot is not the cleanest job you can imagine on the farm.  Little man’s aunt came down to deliver him an early Halloween basket tonight. Since Little man, his father and I were completely covered in mud and only about half way through banding the newest birds to the farm, she didn’t stay long to visit.

When we were done, my clean farm clothes were no less that half soaked with mud, blood and dirt from a short afternoon’s worth of work on the farm.  The shoes and boots, in far worse shape then the clothes, were deposited on the back porch. Just inside the back door to the house reside the washer and dryer.  The clothes that all three of us were wearing didn’t make it more than five feet into the kitchen before we stripped them off and deposited them directly into the washer.  Showers were taken before dinner hit the table and clean pajamas kept us cozy as we filled our bellies and completed our evening.

As I bought my first washer and dryer for my second or third apartment, I never thought I would be washing the same set of clothes twice in one day or several times in one week.  Jackets were washed once or twice a year, not every week. Never did I think I would spend so much time thinking about laundry. But as your budget becomes snugly managed and several extra sets of clothes are not in the budget to carry you through to the next day at the laundromat, $7 parts and free on the side of the road have ensured that the rest of the farm projects will get done in moderately clean clothes and this mom can still be somewhat presentable at her off farm job.
Posted by Wandering Moose Farms at 2:36 AM