Whats in the bucket? 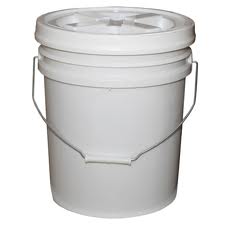 DH came into the house the other day with a lidded five gallon bucket.  Buckets coming into the kitchen generally mean collecting the scraps to feed the pigs or items headed for the compost pile, rarely do they have a cover.  He set the bucket under the counter to the baking cabinet and sat down to help me, I had just started processing two bushels of tomatoes for sauce.  Outside of walking around the bucket several times on my way to and from the sink, I hadn't given it too much thought.

Lately I have been trying very hard not to start another project without finishing the first.  Several crochet and knitting projects are scattered around the house in various states of completion from when I was pregnant - little man is now 9 1/2 months old.  Magazine filing, scanning, and other information gathering projects are in piles on top of filing cabinets and bookshelves around the kitchen and living room.  Various crafting projects; a Christmas stocking, a feather fan, a couple of fleece blankets, occupy shelves in the back shop.  And this doesn't include any number of projects from the to-do list for outside the house.

As the stock pot was nearing capacity and all the tomatoes had been seeded and were waiting their fate in the food processor, my attention turned to the bucket.  He told me where he was going before he left the house, but I hadn't had the required 16 ounces of caffeine infused liquid required before the brain captures and retains information presented to me; for the life of me I couldn't think what was in the bucket.  Little man was fed, changed and playing in his walker.   I headed for the bucket.  "You are going to need some saved containers, probably a milk jug and a ladle."


DH had brought back five gallons of raw milk!

I carefully removed the lid revealing the most lovely light tan liquid.  Anyone not familiar with raw milk might be thinking - TAN, are you sure something isn't wrong with your milk????  Heavy cream had risen to the surface.  Carefully I scooped off almost two inches of the thick, sweet liquid into my bowl.  Some was stored in the refrigerator, some was mixed with for half and half, and the rest was stored in the freezer.  The lid was placed back on the bucket while I finished the tomatoes and went in search of containers large enough to store my treasure.  All the possibilities raced through my head - yogurt, mozzarella cheese, perhaps my first attempt at ricotta cheese, oh I think I might have been drooling.  DH thought that ice cream would be a good idea - maybe if he wants to do the cranking.

For now the milk is stored in gallons in the refrigerator and I am hoping to carve out some time for yogurt today.  Whatever doesn't get processed today will go in the freezer until my days off next week.  In time I am hoping to improve my cheese making skills even further, set aside some space to act as a cheese cave and start aging some cheddar and maybe even provolone.  Until then, I am thrilled for fresh delicious raw milk.
Posted by Wandering Moose Farms at 7:05 AM 1 comment: 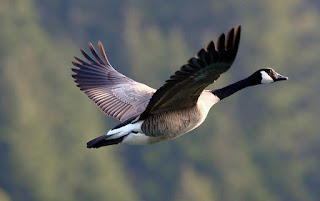 Little man awoke just after six a.m., therefore so did I.  Our normal morning routine involves a snuggle, a clean diaper, then we sit or lay him back in his crib with a bottle while coffee is made, clothing adorned, teeth brushed, etc.  As I prepared his bottle I heard a lot of noise coming from the south end of the lake, but my focus was on the task at hand.

I stepped out onto the porch with my coffee just as the sun was breaking the horizon, the first tendrils of light turning the fall colors neon orange and day-glow yellow.  The lake was calm giving little hint as to the origins of what sounded like a cocktail party going on down by the lake shore.

As the sun crested the trees on the hill at the east side of the lake, the noise level peaked and the party broke up.  The sound of thumping, like that of the party guests running out on their host seemed to join the conversation.  Ripples and waves replaced the once calm lake surface and the thumping by splashing as a few hundred Canadian geese took flight.

A mob arose from between the trees surrounding the lake, then one by one the geese fell into an orderly V and continued southward, their cocktail party settling into a quiet conversation.  Just as the warmth of the sun crept around the corner of the house to the porch I was sitting on, the last of the geese passed out of my view.

I guess every once in a while you don't mind a cocktail party at 6:30 a.m.
Posted by Wandering Moose Farms at 6:21 AM No comments: