Not too long ago I wrote about challenging Mother Nature and moving forward with my plans, to hell with the weather and all that she had planned.  Well, She answered back in a BIG way.

This summer challenged this farm with a 50 year drought.  Wells and springs that were plentiful ran dry, including the one on this farm.  Thankfully the generations before had provided backup systems that allowed this farm to provide water for its two and four-legged residents alike.   As fall came to a close and an earlier than usual winter closed in with ice-in on the lake a full week earlier than any that this farm had ever recorded, the rains came and the spring brought forth water once again.  The pipe that runs from the spring to the well has sunk and the gravity feed which was once reliable has become an every other day appointment to re-prime.  Family intervention brought a new drilled well with a gallon per minute source of water to feed the homestead.  Unfortunately, the drilling came a week too late and the ground has frozen so that the ditch from the well to the house will wait until spring before pipe can be laid.  No matter the weather and no matter the to-do list, the appointment with the spring will be kept every day for the next four months to ensure that human and critter alike will have plenty of water.

In August the boar broke through the fence and began romancing the sows.  This homesteader thought little more of it than to record the date in her calendar, just-in-case.  Well three months and three weeks later – and earlier this evening – while feeding, watering and providing extra hay, she noticed that one particular sow appeared to be coming into milk.  In three days or less, while evening temperatures are forecast to be below zero, we will – in all likelihood, be having December piglets.  An extra trip to the grain store, a few extra hours in the pigs pen shoring up housing and wind protection, running some new electric fence, and probably more than a few hours of lost sleep over the next few days; there will, hopefully, be a successful delivery.  All of the piglets from this summer remain on the farm.  Mother Nature answered my challenge in no small fashion.

Thursday, amidst snow squalls and falling temperatures, the high tunnel arrived.  I certainly was dreaming to think that the freight company would pull into the dooryard and plop a 30 x 72 high tunnel, completely constructed and ready for compost delivery, onto the site which is only slightly prepared for it.  Dreaming it was.  The truck who delivered her got stuck twice on the flat part of the driveway.  Were it not for my fantastic cousin, the truck would probably still be in the door yard.   The pallet she came on was only partially intact; the load was collapsing even before we came close to it with the tractor forks.  Patience, experience and some wire cutters were what was required to make a quick delivery into just over 90 minutes work.  Some more skilled tractor work and a strong chain to extricate the truck and trailer from the dooryard were required and now the pieces/parts rest on my front lawn. 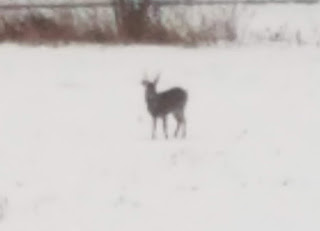 Finally, tomorrow marks the close of muzzleloader season in Vermont.  The evening after rifle season closed – less than 24 hours – this beautiful (although the picture is quite blurry) eight-point buck posed about 75 yards off the front deck.  I am certain that he acquired a calendar from the local grain store and checks off the days of hunting season.  I expect around 5:00 tomorrow night, he will visit again knowing that he has made it safely through another season.

The balance of this weekend will be spent with family over coffee in the morning, shoring up pig housing, running some new electric fence, bringing in a pile of fresh, warm bedding in anticipation of farrowing, posting sales of pork at rock-bottom prices, staking out where the posts will go for the high tunnel, recycling the old greenhouse plastic into both swine housing and tarping for the new high tunnel parts.  All the while Christmas tree sales will thankfully continue, and in between all of the above, hopefully I might find some time for a little house cleaning, getting ready for the upcoming week of off-farm work and school, and, perhaps, a load of laundry or three in there somewhere.

It appears her response was -
“OK Lady, Buckle Up!  It’s going to be a bumpy ride!”

Posted by Wandering Moose Farms at 7:46 PM No comments: