It has been seven weeks since we inseminated Pig.  I dutifully checked her on the weekend of April 26th but was unable to confidently say whether she was in heat or not.


Since Pig wasn’t giving me any tell-tale signs of pregnancy then I may have to resort to the high tech route with the veterinarian and the ultrasound. 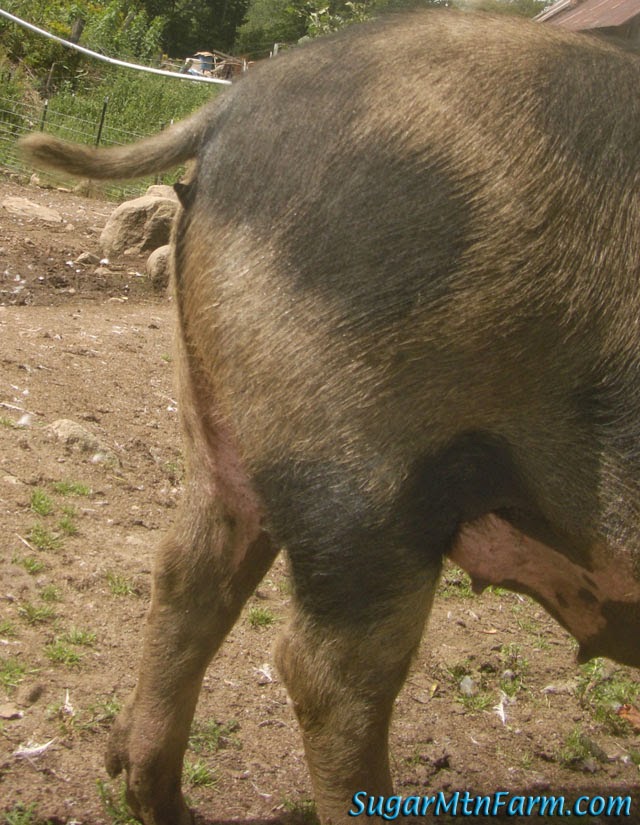 In the meantime I resorted to the interweb to see if anyone had an inexpensive way to determine if she was pregnant – low and behold – pigs have a pregnancy indicator.  All I can say is leave it to a VT farmer to figure this one out!
(This picture is directly from his post).

Back out to Pig’s pen I went – grumbling as I crossed the yard to find that she had toppled the newly constructed shelter for Zeb – our new Gloucester Old Spot boar.  Thankfully he is still in the shed as he is too little to take notice of the bottom strand of electric fence.   I went into the pasture and began the process of resurrecting the shelter in hopes that she would leave it standing for a couple of days until I could get some reinforcing posts driven into the ground.  All the while she is having absolutely none of my being in her pasture or near her house.

If I am carrying food, water or hay, then I am allowed to go anywhere in her pasture.  If, however, I dare to enter her space, especially to work on this new structure – then I am to be banished and quickly.  Now, I am no small whisp of a girl, but this 600 lb. sow is no match for me when she has her mind set.  I retreated to the fence line while Little man and his father brought over a bucket of fresh water.  Back inside to look at her backside – ta-da!  From what I understand, the weight of the growing piglets pulls down on her insides which are connected to the outsides and voila – pig pregnancy indicator.

Now Pig is five years old and has had several litters before so her backside does not look exactly like the gilt in the picture.  So here’s hoping that this built in indicator means piglets in July.

In the couple of weeks since, Little man’s father has done a pretty good patch job on Zeb’s shed – which is to say that Pig hasn’t knocked it down, yet.  Zeb is getting fed up with being stuck in the shed, perhaps next week we will try to get him out into pasture – he should be just about tall enough to reach the bottom strand of fence.  Of course we will try introducing the two of them first to be sure Pig will tolerate him adjacent to her space.  If not, then there will be some re-engineering going on and fast!

It is spring around here folks and there is lots happening, please bear with me as I try to eek out some more time to get more posting done.
Posted by Wandering Moose Farms at 1:21 PM No comments: 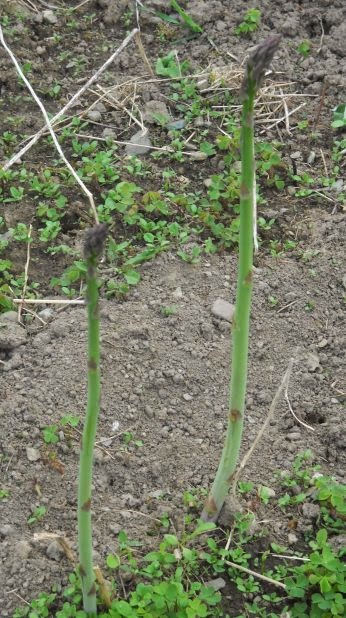 We planted it three years ago, last year there were a couple of spears, enough to be a palette teaser.  Our first real harvest of any vegetable for 2014 yields enough for dinner for the three of us and there is more coming!
Posted by Wandering Moose Farms at 4:03 AM No comments: