Critters, both two and four legged alike, are confused by the weather on the farm this week.  On Friday, Mother Nature blessed us with a foot of beautiful white powder.  Certainly early for the season and reminiscent of winters 35 years past, it has been both a gift and a chore.

The Canadian geese were as puzzled as I as they gathered at the south end of the lake.  The 'cocktail party' that typically ensues at the end of October during their annual migration was alive and well this mid-November evening amidst Mother Nature's fresh coating of white.  Chores, usually assisted by the child's wagon found free on the side of the road, were completed these evening by plastic sled carrying feed and water to the pigs. 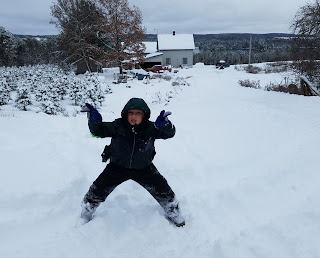 That same sled, after chores, carried the almost seven year old down the hill and driveway more times than fingers could count, giggles and full bodied laughter echoing behind as the sled went over the snow bank into the Christmas trees.

The first tree of the season was cut today and left the farm in the care of a young family who travel a lot for the holidays and asked to come and get theirs early so as to enjoy as much of their own season as possible before visiting their extended family across the country.

Our early season covering of white has made the ensuing construction of the high tunnel all that much more interesting and predicted low temperatures of single digits below zero on Monday aren't helping.  Sore muscles from regular chores and maintenance on the farm scream just a little louder as shoveling has become a necessary addition to ensuring all the critters have fresh, thawed water and feed.  This farmer remembered how to plow, albeit not a very pretty job, after better than 30 years away from being behind the wheel of a plow truck. 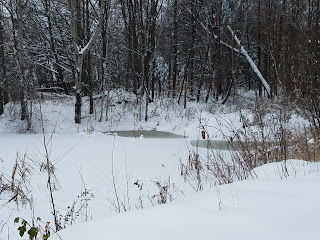 While chores may take a little longer and the grand plans for the coming season may be delayed a little - this farm moves forward.  Challenges have been laid down.  Perhaps the plow truck will clear the spot for the greenhouse instead of the 70 year old tractor.  School is out this week and this farmer has a chance to make a dent in some of her long overdue projects.  Mother Nature has laid down her challenge with a solid covering of the white stuff.


To quote one of those popular movies that came out in the last few years -
"Challenge accepted!"
Posted by Wandering Moose Farms at 6:51 PM