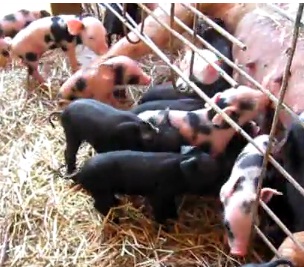 The farm started looking more like an actual farm becoming home to its first livestock in more than 40 years this fall.  Bacon and Pork Chop arrived on the farm from a dog crate in the back of a minivan.  So began the journey into swine.
It started with a facebook posting from a friend who said he would have piglets soon.  Salvaged fence posts, chicken wire, roofing paper, pallets, an old tarp, and some insulating plastic were collected and assembled into a pig pen and shelter in a fairly dry spot across the driveway.  A washtub for a feed bucket and the bottom of a chicken feeder for a water dish, we were ready for our swine right after the last powwow. 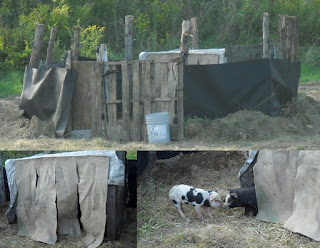 The pen worked great for the first few weeks until the piglets got bigger, more curious and apparently that much hungrier.  Under the side of the fence and through the tar paper, they came across the driveway, behind the garage, and took up residence underneath the back porch of the house.  Two hours later with a little elbow grease, some persistence, some more cunning and then a lot of squealing the two pigs were securely back in their pen.
Then there was the rain and a lot of it.  Our fairly dry spot was filling up with water and each day was a losing battle to reinforce the sides of the pen against the rooting swine.  Not that I blame them, I wouldn’t want to sleep with my head in a pile of wet muddy hay either.  We tried several quick fixes and none of them drained the water from inside the pen; it was looking like this was going to be some expensive pork if we had to start over or purchase a shed to house them for the remainder of fall.  Finally, a relative break in the weather combined with a visit from my stepdaughter.  The three of us together with the tractor, backhoe, some PVC pipe, shovels and two loads of muddy laundry; the drainage problem in the pen was solved with no escapees.

Now approaching 125 lbs each, the piggles are getting bored in their pen and are starting to look for a way out again.  Bacon and Pork Chop are freezer bound around the first of the year at about 160 lbs each.  While it is the perfect size for starting pigs, our salvaged materials pig pen will not be sufficient to house two full size sows or a sow and boar.  We have already started salvaging additional materials to build a larger enclosure, with better fencing, for the spring pigs.  We learn something new everyday on this farm, in the meantime we wait patiently for cooler weather and a freezer full of our own farm raised pork. 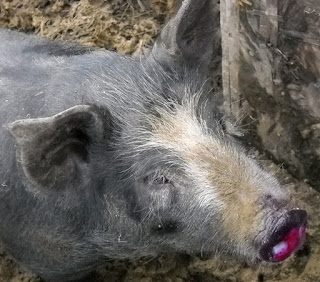 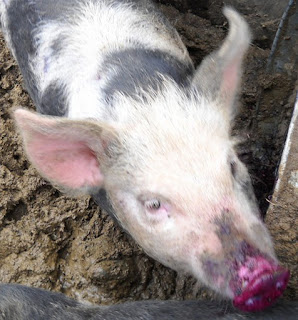