Who needs coffee when you have critters?

Early mornings at our house are Mom’s time.  The house is dark and quiet; the only critters that are barely stirring are the two cats that got tossed off the bed when Mom got up to silence her alarm.  She heads to the kitchen, starts the coffee and takes that few minutes to check e-mails and bank balances before getting on with the day.

This morning, the computer was barely waking up and the only light in the kitchen was the glow from the red light on the front of the coffee pot.  Thursday’s include checking the order for the Fairfield Farmer’s Market.  It is an online farmers market where the vendors list their items that will be available that week and orders are taken until midnight on Wednesday.  All the produce, jams, jellies, dairy, meat, etc. are dropped off at one central location and can be picked up by the customer at four different locations throughout the county.  There is a little less meet and greet, but it is very convenient in today’s online age.

Slam, Clank, Crash!  Those darned cats had knocked something over in the back room, again!  Most of them are in their mid-teens, one would think that by now, they would be done climbing the walls.

The house returned to its slumber and the whirring of the CPU joined the drip of the coffee maker.
SQUEEEEEE, AAAAHHHH, EEEEEEEE, AAAAAHHHH
That can’t be good!  I jumped out of my chair, turned on the lights – all the cats were accounted for.  Little man rarely wakes up this early - my heart dropped to my toes - I ran to the living room and flashed on the light.   Little man lay snoozing on his father’s chest where I left them around three o’clock this morning.  Instant relief!
Crash!  SQUEEEEEE, AAAAHHHH, EEEEEEEE, AAAAAHHHH, Crash!

The sounds were coming from the basement.  I grabbed a flash light, pulled open the door and carefully descended the narrow stairs – my heart was still racing, I was barefoot and hadn’t had my first cup of coffee.  Nothing should be in the basement except the water pump, the boiler and the water heater; if those mechanicals were making these kinds of noises then we were in for a rough ride.  The squealing continued as I reached the bottom of the stairs.  In the far corner under the shelves of empty preserving jars and behind the old water heater there was a ruckus.

Eyes still clouded with sleep and just calming down from sheer terror, I couldn't figure out what I was looking at in the circle of yellow cast from the flash light.  After what seemed like an eternity, it let go of the mouse that it had in its grasp and turned toward me.  A WEASEL was inside my house!  I thought about throwing the pipe wrench at it, but I wasn’t sure if it would only get mad and come after me – they have some sharp teeth.  Deciding I wasn’t much of a threat, it returned to terrorizing his breakfast.  I found an empty wicker basket and attempted to capture it.  Remember, I haven’t had any coffee yet; wicker can’t keep a weasel in for more than 15 or 20 seconds before it would chew through the sides.  He wisely decided that I wasn’t going to allow him to finish his meal so he skulked off, climbing the stacked stone foundation and headed out along the plumbing towards the old ice house.


There is a trap set in the basement and when I get home we will set one outside as well.  The last thing that will be taking up residence with a long winter coming is a weasel – our chickens could be in for trouble with a family of these buggers hanging around.  I was awake now, running behind schedule, but awake!  I still took 24 oz of that hot, energizing deliciousness to work with me.
Posted by Wandering Moose Farms at 12:09 PM No comments:

Email ThisBlogThis!Share to TwitterShare to FacebookShare to Pinterest
Labels: Animals

If only cats were good at taping 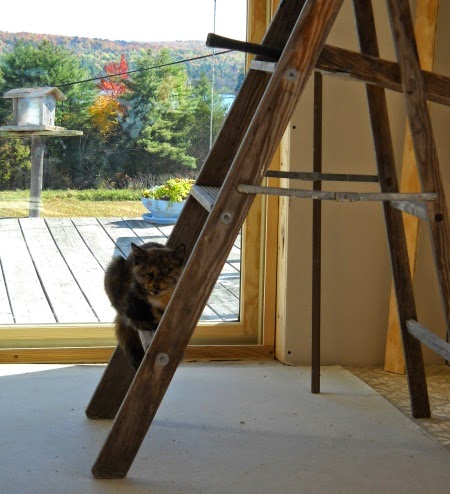 One of the projects that was on the to-do list for this summer was to tear out and re-insulate the south wall in our kitchen.  Last year the frost built up on and around the windows and when the breezes came from the south we couldn't leave a candle burning near or on the window sill as it would not stay lit.

One weekend was allotted to complete the majority of this project, demolition, insulation and sheet rock.  In early August the plaster and lath was torn out from the wall and we discovered that the windows were installed without headers or sills - this does not make for very strong construction.  I build sturdy, but never seem to achieve square or plumb.  The headers and sills would have to wait until I had some help.

Late in September, my father came to visit and he took one of his valuable vacation days to re-frame around the front door and the two south facing windows.   A friend and contractor was enlisted to install the sliding glass door.  Then the door was delayed.  Three to four days turned into weeks and bow-hunting season was looming, scheduled to start at the beginning of October.  The door arrived two days before he was headed into the woods.

Then it started to rain.  One thing that you generally try to avoid is having a huge hole in the side of your house when the rain is pouring in from the east.  It dried up slightly and between rain drops, even though it was hunting season, he came to the house and installed our new door.  Two days later the rain stopped long enough for him to return and repair the sheathing, install the flashing and trim out the door.  Sheet rock and insulation went in the day before my birthday and the first coat of taping was completed last week.

The weather has turned damp and cold this week.  I was able to scrape enough money together to get a delivery of propane and the wall is closed up so that we can turn the heat on.  Our weekend project took the path of many of the projects that are tackled on this farm.  Now just over two months later there remains another coat of taping, priming, paint and re-installation of the trim boards.  But the house is warm for the time being and the rest will get done as time permits.  If only Patches could yield a putty knife as well as she holds the ladder still.
Posted by Wandering Moose Farms at 1:59 PM No comments:

Alas, there were to be no piglets on the farm this summer, she wasn’t pregnant after all.

Pig, as you may be aware, came to us as a rescue with a somewhat notorious history of reproductive difficulties as well as the general obstacles associated with trying to retrain an adult sow.  When we tried to relocate her last fall from her pasture into a warmer, drier shed for the winter, she refused to cross the line where her electric fence was.  No matter what we tried she refused to leave her pasture.

The money was finally saved and in early April we tried artificial insemination.  Three months, three weeks, and three days later, it was time for piglets (or so I thought) and we watched, and we waited.   Midnight checks after what I thought was her ‘water breaking’ – still no piglets.  Pig’s labor wasn’t progressing; it was time to call the vet.  She came and we tried to check Pig’s private parts – she wasn’t having any of us monkeying around back there.  600 plus pounds of unhappy sow isn’t easy to wrangle.   Little man’s father, the vet, little man and I offered food, treats, water, cake, pancakes and more to Pig so that we could catch her – no such luck!

The following day there was no change.  Pig was panting and not eating or drinking.  We called the vet and she came back with sedation. Three shots with the tranquilizer gun and she still wouldn’t go down.  They say that animals can take on the characteristics of the caretakers – well stubbornness certainly runs in this family!  After returning from my off-farm job I found Pig in the middle of her pasture, still panting, although slightly groggy from the medication.  I chased her around her pasture once with no luck and finally managed to convince her that her house was a much nicer place to hang out.  We put in some barricades and secured her as best we could.  It certainly helped that she was already pretty loopy.

Back inside for yet another call to the veterinarian.  It was after office hours and this would be the third visit out to the farm in two days.  Before he even agreed to come out, he made sure we had her secured so she could actually be examined this time.  He arrived and little man’s father and I held the barricades in place while he went in and checked for piglets.  She wasn’t happy, but she didn’t escape.

“I’m not feeling anything,” he said.

My heart sank, months of waiting, signs of pregnancy, signs of labor and now no babies.  He went back to his truck and got the ultrasound and confirmed that there were no piglets.   She had had some sort of phantom pregnancy.   I guess I wasn’t going to be a father after all.  We talked some more and I asked if we should try again given her age and the cost of artificial insemination and he confirmed that it is very difficult for older sows to become pregnant and when they do, they have harder pregnancies.

Alas, the decision has been made that Pig will leave her pasture this fall and take residence inside the house in much smaller packages.  With the two vet bills, the artificial insemination and the extra grain that we fed her because we thought she was growing piglets, we have a little over $725 invested in this rescued pig.  We can expect around 500 lbs of pork from her in various cuts at a cost of $1.60/lb. after buying the wrapping material.

Lessons learned from the Pig breeding adventure include –


Once the heating season is over, we will be on the hunt for a new gilt or sow.  Ideally we would love to breed early this winter for spring piglets, but that will depend on cash flow.  If anyone has a healthy, heritage breed, gilt or sow for rescue/barter in Northern, Vermont or upstate New York, please reach out to me.
Posted by Wandering Moose Farms at 12:04 PM 2 comments: