When I moved back to Vermont I was concerned that I would miss things like the twenty-four hour grocery store, the pizza place which was open till the wee hours of the morning, the variety of fast food places available who deliver, and a short twenty-minute drive into the Bronx for some of the best Italian food anywhere.  There are days when I still miss those things; but the forty-five minute ride one way for a pizza at ten-thirty at night is a deterrent.  Nothing in the nearest town was open later than 9:00 p.m.; I was forced (I use that term lightly) to start preparing my own meals again.
﻿ ﻿
I remembered how much I love to cook and how much more I love GOOD food.  My mother is a good cook and an even better baker.  She was kind enough to let me help her prepare baked goods and dinners, even though I am pretty sure I was more of a hindrance than help.  My father taught me to grill.  I have gone through more BBQ grill elements and components that I can count, even grilling when it was snowing.  Recipes like American Goulash, Shepherd’s Pie, Boiled Dinner, and Country Style Spareribs came from my grandmothers, though I have modified them slightly over the years.
These family meals quickly became staples, leftovers freezing easily and reheating quickly in the microwave.  Roasted chicken easily stretched into several meals adding leftover recipes to the repertoire.  Then I met my DH; I had eaten wild game before, but never so much as when we started dating.  I still can’t cook it as well as he can, but I am learning.  Then the garden, the first one planted, harvested and eaten all on my own, was planted in 2005.  My grandfathers were the gardeners in my family and although I had watched my mother and grandmother can and preserve, I had never tried my hand at it.  Amazed at how easy it was I began adding marinara sauces and salsa.
Armed with old family cookbooks, new recipes from holiday gifted cookbooks, the internet, and great, local food, the variety of meals are endless.  Grilled, stuffed portobello mushrooms; ham, potatoes and green beans in a dill-yogurt sauce; carrot, apple, zucchini muffins; honey, oat, wheat bread; and prosciutto, provolone and basil stuffed chicken breast have quickly become favorites.
Grilled Stuffed Portobello Mushrooms
Portobello mushroom tops (cleaning out spines provides more room for stuffing, but is not necessary)
Sausage, ground beef or turkey, or other stuffing of your choice
Fresh spinach, chopped
Small, chopped onion
Two medium tomatoes, chopped
Two cloves of garlic chopped
Mozzarella cheese, shredded
Brush mushroom tops with EVOO and set aside.  Sautee garlic and onion in EVOO, add sausage/ground meat and brown.  Remove sausage, add spinach, toss until wilted.  Mix sausage back into spinach.  Fill mushroom tops.  Grill till mushrooms are almost done 6-8 minutes.  Add chopped tomatoes and cook 2 minutes more.  Add mozzarella cheese and cook until melted.
Serve with fresh, crusty bread.
DH has mentioned lately that we should try to grow mushrooms as portobellos can be expensive; add one more project to the to-be-researched list.  Eventually we would like to start raising our own pork, curing sausage and making pancetta.  In the meantime, the butcher shop and the grocery store will have to suffice.
Posted by Wandering Moose Farms at 11:15 PM No comments:

Email ThisBlogThis!Share to TwitterShare to FacebookShare to Pinterest
Labels: Cooking

My to-do list swirled around in my head holding sleep at bay this afternoon (my other job is working nights).  I resigned myself to come out from under the blankets and go into the kitchen and get a pad and pen so that I might expel some of the projects from my brain and onto a list for later planning.  The page of the steno sized notebook was quickly full and I was finally able to lie back down and close my eyes.  Sleep still evaded me and I laid there with my eyes closed thinking about what my farm will look like when it is done.  “Done,” I chuckled.  When is farming ever ‘done’?
A full cheese cave popped into my head, several wheels of aging cheese in various stages of repose.  Next to the cave is the root cellar, full of winter squash, potatoes, garlic, onions, and carrots.  Walking back towards the stairs, the shelves full of preserves and canned vegetables stand proudly in a rainbow of colors.  The two freezers just past the shelves are full of frozen vegetables, berries and meat from the summer and fall harvest and hunting seasons.
Up the stairs onto the wood warmed main floor, the kitchen in front of me, cabinets and walls made from the knotty pine which my father complained blocked his view of the lake.  The maple tree which stood beside my grandparents’ home provides the counter top for the island.  Hours spent picking stones from the corn piece and meadows on the farm are that much more rewarding when the result is the stunning hand stacked fireplace that occupies the center of the main floor living area.  Orange, yellow and red flickers from the fire provide even more warmth as we nestle into the couch to enjoy a glass of cider pressed from the heirloom trees in the orchard we rehabilitated not to long ago.
Outside, the breeze tosses up a flurry against the oversized windows which look across the deck and down over the hill to the lake beyond.  The chicken coop light casts a gentle glow through the window onto the whitening lawn below.  Smaller outbuildings which house the pigs, rabbits and goats did not get their desperately needed extra coats of paint this year, but perhaps some warmer weather will bless us in the next week or so.
The kids are sleeping upstairs dreaming no doubt of their escapades with the loose rabbit today.  Small growls, ‘ruff’s and twitches of tail and paws accompany the dreams of the dogs chasing the moles between the Christmas trees.  Gentle snores come from the husband against whom I lean with dreams of the day hunting and the conquest of deer that now hangs in the garage.  Soft flute music wafts through the air as the fire burns down.  I snuggle deeper into my husband’s side sipping on my cider and think to myself, ‘there is probably something I could be doing right now.’  But I think better of it and drift to sleep in my husbands arms, on the couch, in my house, on my small farm in Northwestern .
I awoke tonight with renewed enthusiasm that my vision/dream of the warm cozy farmhouse will happen.  Tomorrow I will check one more thing off the to-do list with finishing the winterization of the chicken coop on one of the last warmish days I think we have left this fall although with the rain, this chicken coop too will not get the coat of paint it needs.  And even though the mowing didn’t get finished, I think it might be time to put the lawnmower away.  The grass will still be there in the spring.
Posted by Wandering Moose Farms at 1:12 AM No comments:

Two years ago I was determined to get a head start on my seedlings.  Scavenging around the farm, I found some old pantry shelves and a couple of extra shop lights – ‘Aha! I can start the seeds in the basement.’  A month later all the seedlings were leggy and falling over and it was still too cold to put anything outside into the ground.  Throughout last summer and fall I looked around the interweb for plans, ideas, and suggestions on how to build cold frames and greenhouses.  In the barn there are several (at least 30 varying sizes) old storm windows that were saved out of various farm buildings as new ones containing descriptors such as double paned, UV protected, insulated, etc. were installed.  They had to be good for something besides dust collecting.  My stack of pallets was getting taller as well, some of that wood had to be useful for making a door or even some gable ends.  I never thought of myself as a pack rat, but I think I have become a careful saver.  I started seeing the value of reclaimed wood from pallets; it makes great framing for things like nesting boxes, mudroom shelves, and display racks for farmers market.
The project started one March weekend when cabin fever had gotten the best of me.  Snow still clung in icy clumps on the lawn and the lake was still frozen over, but the temperature was forecast to be in the low 40s and sun all day – ‘Honey, do you feel like running to the lumber yard?’  With cautious enthusiasm, DH made the 11 mile journey to the lumber yard and brought back some lengths of 2x4 and some longer wood screws – 1” were not going to hold the framing together.  I went out to the barn and started bringing the dusty, dirty windows down from the upper regions of the barn.  Armed with several windows, a drill, circular saw, some screws and a doodle on the back of the misprinted DMV schedule we went to work on the new greenhouse.
Master carpenters we are not, but everything we have built so far has stayed together even in the worst of weather.  Day one saw the completion of three walls, and a desperately needed washing of the windows.  The greenhouse is not very big (I am 5’ 8”) and doesn’t have any supplemental heat, but it was certainly enough to start everything that wasn’t going to be direct seeded. 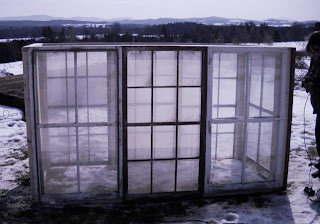 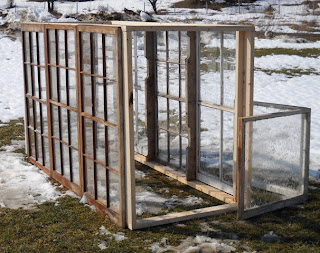 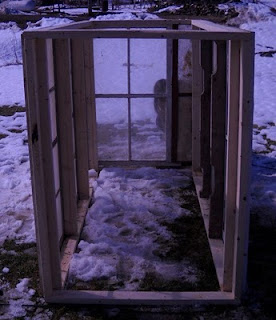 Day two gave us a roof.  I was surprised that it came together with 90 and 45 degree angles.  To this day I am still amazed I got a B in geometry. 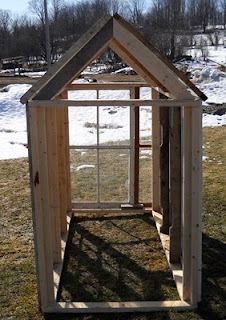 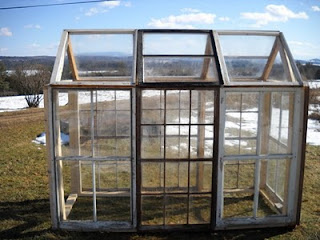 Day three gave us a door and gable ends to the roof. 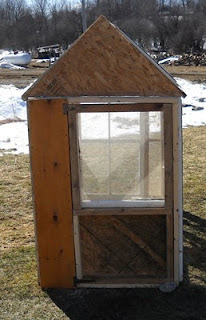 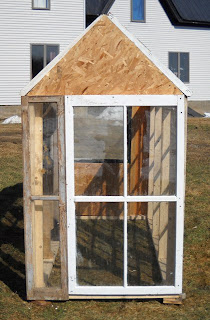 Each day the snow receded further and on day four shelves were installed (although I didn’t take a picture of those).  Seeds were started over the next several days and by late March we had full flats of seedlings emerging.  At night we covered the greenhouse with an old pool cover (another roadside saved item which we had no idea what we were going to use it for) to keep the frosts from damaging the tender leaves of the seedlings.  We learned that the small size of the greenhouse requires some additional ventilation so we are going to work on a solar powered, thermostatically controlled fan over the winter.  The whole project cost about $30 in new materials and there are still screws and 2x4 sections left over.  Reclaimed pallet wood ended up being used in the framing as well as the door and roof supports.
It certainly is not a sight to behold, but reclaimed hinges, salvaged windows and plywood pieces make an OK little greenhouse for getting the garden started.  Perhaps when a family member has leftover paint from their next project, the whole thing will get a little ‘prettier.’  For now it is functional and it grew some great veggies this year! 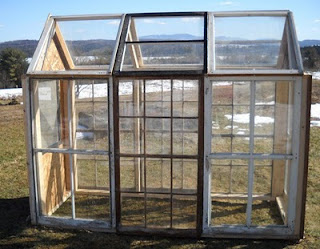 Posted by Wandering Moose Farms at 1:46 AM No comments: